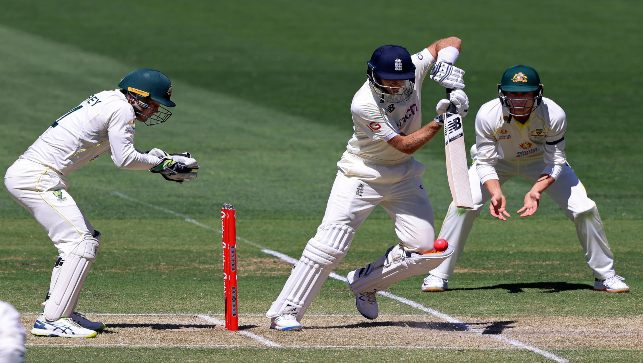 AUS vs ENG Live: England fought hard to hold on to a draw at SCG, a final over cliff-hanger match on the new year’s Test match, led from the front by Jonny Bairstow and Ben Stokes in both innings.

There were gripping moments on the final day of the 4th test. With Broad and Anderson holding their nerves against Steve Smith and a charged up Australia to avoid chances of a series whitewash. Usman Khawaja made a roaring comeback to the side at SCG, scoring terrific hundreds in both innings.

He shut the mouths of his naysayers. After being sidelined for more than two years. There was a lot at stake for him, and he delivered at the biggest platform for the national side. Australia will be the crestfallen side, as it ended in a draw. But they would want to ponder over the talks about whether Australia should have declared earlier. With the rain playing the spoilsport in between.

However, take nothing away, the kangaroos are leading the series 3-0 comfortably. So they wouldn’t be much interested in these talks as a team.

Hobart is all geared up to host the day and night Test match for the first time in Australia. Adelaide, Brisbane, and Perth have hosted the marquee Test match in the Australian summer thus far.

Australia
The hosts will be looking to end the series on a high and seal their domination over this England team. The hosts haven’t lost a single Test at home in Ashes from 2014. The big names stepped up, and novices came into the party throughout the series like Head, Boland, Khawaja, etc as other players got injured/ affected due to COVID.

Even though their leading batsman Steve Smith had a quiet series outing, compared to his career performance, he still came forward with crucial knocks and helped the team to push over the limits in valued sessions.

Apart from Starc and Lyon, there were changes in the bowling unit in every test. And whoever came as a replacement of core bowlers did their job, whatever management has asked from them.

The standout performance was from Scott Boland and his 6 for 7 at the MCG. Australia has dropped Marcus Harris for the final test after the twin hundreds by Usman Khawaja at Sydney, and Travis Head. Who had missed out on the 4th test due to an injury, replaces Marcus Harris in the side.

Also Read: Most Fifties as Captain in Ashes | Check Out Names

Pat Cummins has got some headaches with the fitness of Scott Boland. He will be undergoing a fitness test ahead of the Hobart Test. If he is not available, then Jhye Richardson or Micheal Neser will make an appearance in the pink-ball Test match.

England
Visitors had a rough and turbulent tour so far with the form of batting unit, injury to the players, and even losing the Ashes Urn in the first 3 Test matches itself.

But there have been some positive signs like the form of Jonny Bairstow, the way Mark Wood bowled in the series, and Ben Stokes coming good in the last test match. Yet, the headaches are more for the skipper Joe Root and co. Bowlers have been doing their job, but they failed to capitalize the chances against Australian batters and had mixed times in every Test match. But one can be sure that they did a fair job compared to their batsmen in this Ashes.

Joe Root confirmed that Ben Stokes will play as a pure batsman in the Test match, which means they need to find a 5th bowling option. We could probably see the captain himself rolling his arm at Hobart.

England will be looking to make some changes, going into the final test match by dropping Hammed and Jack Leach, resting Anderson or Mark Wood. The injury to Jos Buttler and the uncertainty over the availability of Jonny Bairstow only add up to their woes.

We might also see a debutant in Sam Billings, who is prepared to put on the wicket-keeping gloves in the absence of Jos Buttler.

The venue last hosted a Test match was way back in 2016, where South Africa won against Australia by an innings and 80 runs. England is going to play their first test match at this venue.

Rain is likely to play another vital role in the Test match. There will be stoppages, and it’s going to be tough for both sides to get a sudden start every time as they had experienced in the 4th Test.

We are all psyched up to see a green top at Hobart, one of the reasons why England is set to drop Jack Leach in the 5th test. The seamers will be eager to bowl from the word go. We can expect them to exploit the favorable conditions, and bring up early results in the test.

Remarks from the Captains

Joe Root:
” I think the performances we put in during the first three games, I feel we’ve let coaches down to a degree. We’ve not played anywhere near the level we are capable of. It’s a chance to do that this week.”

Pat Cummins:
“I look at different leaders and someone like Eoin Morgan. I like his outlook on the captaincy and how he brings the team together. Have worked with Eoin in the IPL for the last couple of years, and we have very similar outlooks on life.”