Home Latest News When & Where to watch Wimbledon 2021 Live: Novak Djokovic vs Matteo... 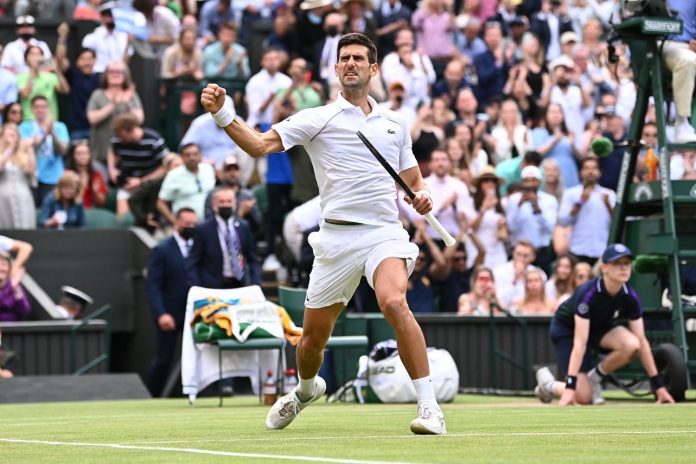 The Live action of Wimbledon 2021 will telecast on Star Sports network and Disney + Hotstar.

History awaits Novak Djokovic in Sunday’s Wimbledon final, when he will try to tie Roger Federer and Rafael Nadal’s record of 20 Grand Slam titles. And the World No. 1 left no doubt Friday evening following his semi-final victory that he is excited for the opportunity.

Novak Djokovic also aims to become the first man since Rod Laver in 1969 to win the first three Grand Slams of the year as he takes on Matteo Berrettini in the Wimbledon final.

Djokovic hasn’t dropped a set since the first one he played this fortnight and has beaten Berrettini in both their previous meetings. The Serb’s experience and his ability to target Berrettini’s weaker backhand make him very much the favourite in this final.

The Wimbledon 2021 final is the third match between the two players, and Novak Djokovic currently leads the head-to-head 2-0 over Matteo Berrettini.

The pair last met in the Roland Garros quarterfinals last month, where Djokovic prevailed in four sets. The Serb also defeated Berrettini in the round-robin phase of the 2019 Nitto ATP Finals.

Matteo Berrettini improved to 11-0 on grass in 2021 and 32-6 this season as a whole by beating Hubert Hurkacz to reach his first Grand Slam final.

Berrettini dropped a set to Hurkacz, just as he had done against Felix Auger-Aliassime in the quarterfinals, but otherwise was largely in control of a 6-3 6-0 6-7 6-4 victory. Berrettini’s booming serve and big forehand were both very effective and he protected his weaker backhand wing well.

Hurkacz was not very good for most of the match, however, and did not produce the same form he did to beat Roger Federer in the quarterfinals.This will be Berrettini’s fifth match against a top-10 player at a Grand Slam. The Italian has lost all of them, two of them in straight sets.

Novak Djokovic is now on a 20-match winning streak both at Wimbledon and at Grand Slams in general after beating Denis Shapovalov in straight sets in the semifinals.

Djokovic was not even particularly good against Shapovalov and was still able to win 7-6 7-5 7-5. After going down a break in the first set, he saved the other 10 break points he faced, with his ability to get first serves back into play and force Shapovalov to hit one more ball both proving crucial.

“I don’t think the scoreline says enough about the match. He was serving for the first set, was probably the better player for the second set. He had most of the chances,” said Djokovic, who has reached his 30th Grand Slam final.