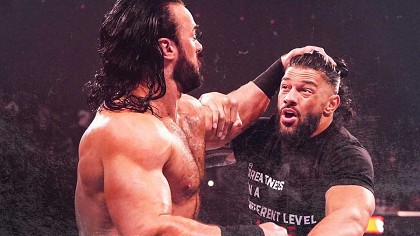 At the microphone in recent weeks, RK-Bro is the attraction that everyone wants to see.

Edge leads a group that has us very intrigued, and even humor has its space and time. .

Before WrestleMania, SmackDown was the hot show. With Roman Reigns at the helm, the show was practically remote-controlled.

The stories were presented in an entertaining way. With the Draft changes we realized that the show could rely too much on certain characters, especially The Tribal Chief.

When he is absent, SmackDown suffers, but it is not the only factor that is causing it to become a boring and predictable program. Here we will leave you some of the keys.

The figure of Roman Reigns is very important today. He has become an unattainable star for others.

On the other hand, the fact that he is such a protected fighter makes the public perceive that.

Nothing is going to change on SmackDown. Right now, he only has Drew McIntyre in front of him.

But recent results have weakened him as a threatening figure. It looks like Reigns won’t be at most events.

This summer either, which should be concerning for FOX and their ratings.

No rival for Ronda Rousey

With Charlotte Flair out of the game (on vacation) there are very few options we have in the blue show to face the new queen.

With Lacey Evans leaving for Raw, the only ‘credible’ thing left is Sasha Banks, who is busy right now – at least until tonight – dealing with the tag team division.

Raw has a huge amount of talent: Becky Lynch, Asuka, Bianca Belair, Liv Morgan, Rhea Ripley, Alexa Bliss… All of them with real aspirations to make it big.

All this suggests that Bayley is closer than ever to returning. She has only competed against Rousey for the Championship once, and that was on Monday Night Raw.

Perhaps WWE had taken this pothole into account and that is why Bayley has not returned to action until now. Raquel Rodríguez is the other alternative, but she is a ‘rookie’.

No rivals for The Usos

If we continue to analyze, we see how we find more and more reasons to worry. The SmackDown tag team division is dead. The best teams are currently on Raw.

New Day is at its worst in years and they have already competed with the Uso brothers on one too many occasions.

Viking Raiders will now have their moment in NXT. And other teams, like Sheamus, Holland.

They company, have no incentive to suggest that they have a special run in mind for them.

WWE is likely to turn to the title unification issue and RK-Bro will be seen more by the blue show from now on. They won’t fix much of the problem anyway.

If WWE manages to keep Roman Reigns on screen in the coming weeks, they should enhance.

The talent that is in a transition period. Gunther, used well, can be quite the draw for viewers.

A rivalry for the Intercontinental Championship would not be a bad solution. The arrival of LA Knight as manager could enhance the spaces currently lost.

He is trained to handle other talents who do not have minutes and we are waiting for WWE to decide to exploit his abilities.

It would also help if the show focused more on Drew McIntyre and if he had a series of wins that really presented him as the contender for the title that we all, or almost all, expect.