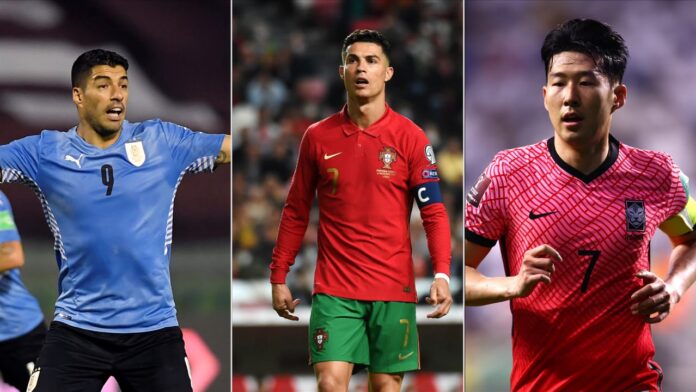 FIFA World Cup 2022: Qatar 2022 will see Cristiano Ronaldo compete in what could be his World Cup finale, and he has a real chance of making the latter stages, as Portugal arguably look like the strongest side in Group H.

Ronaldo and his teammates will be joined by Ghana, Uruguay and South Korea in the group stage, following the draw conducted in Doha on April 1.

Two-time World Cup winners Uruguay are the second highest-ranked team in the group, and will be hoping to replicate their 2018.

Where they reached the quarterfinals before exiting to eventual champions France.

They will also look to unsettle the perceived bigger footballing heavyweights — just as South Korea did by beating Germany at Russia 2018.

For the two teams that advance from Group H, they would match up with a team from Group G in the Round of 16.

The four teams selected into the group will play a round-robin format with each nation facing the other three.

Group standings are based on points from those three group-stage matches — three points for a win, one for a draw, none for a loss.

The top two teams from each group based on total points advance to the single-game knockouts.

If teams are tied on points, goal difference is the first tiebreaker followed by goals scored. If teams are also tied in those categories another set of tiebreakers is applied.

Portugal, as expected, managed to qualify for Qatar 2022 through the playoff path, defeating North Macedonia to ensure an appearance at the finals for the eighth time.

Despite being regular competitors on this stage, though, they have yet to win it.

In all likelihood, this will be Cristiano Ronaldo’s final appearance at the World Cup.

All eyes will be on the 37-year-old talisman and he will be the key player in Qatar — desperate to add a first team world crown to his already bursting trophy cabinet.

Manchester United teammate Bruno Fernandes will also be pivotal for the Euro 2016 winners.

For all their attacking talent, defensively is where Portugal have been most convincing of late.

However, having managed to leak just six goals in their last 10 games in all competitions.

Ghana will be present in Qatar following a valiant effort in the qualifying rounds, cementing a place in the tournament.

The first time since 2014 by beating Nigeria on away goals in the African playoffs.

The Black Stars went so close to reaching the semifinals of the World Cup in 2010, losing on penalties to Uruguay in the last eight.

Despite not having as many household names in the current squad compared to the 2010 and 2014 editions, players such as Arsenal midfielder Thomas Partey.

Young Ajax talent Mohammed Kudus will both be stars to keep an eye on as the tournament approaches.

Grit and determination are two qualities that are instilled into the fabric of this Ghana side, who lost just two of their 10 fixtures in 2021.

But a poor Africa Cup of Nations campaign — in which they exited at the group stage without a win — means there is a point to prove back on the major stage.

Although Uruguay’s squad is a talented one, 2021 was an inconsistent year for La Celeste.

Who were eliminated at the quarterfinals of the Copa America having hoped for much more.

Uruguay also got to the last eight at the 2018 World Cup, where eventual winners France edged them out.

The South Americans do consistently produce players capable of individual brilliance, and that will be no different in Qatar.

Strikers Luis Suarez and Edinson Cavani may be in the latter stages of their careers.

Both 35, but they are still more than able to pose a major threat in front of goal.

So far, 2022 has been more positive for Uruguay, with four successive wins — including a morale-boosting 2-0 victory over Chile in late March.

However, concerns persist about the ability to cope against perceived stronger opponents and the top-heavy age of their squad.

Not since 1982 have South Korea failed to appear at a World Cup and that streak will continue with Paulo Bento’s team competing in Qatar.

South Korea finished second in a tough third-round qualification group, beaten only in the final fixture with a place at the finals already assured.

Prior to that, Bento’s side went on a seven-match winning run, and they will be hoping for similar momentum ahead of the World Cup.

Where they will be looking to make it out of the group stage for the first time since 2010.

Son Heung-min is South Korea’s most recognisable difference-maker, with the Tottenham forward a prolific goalscorer for club and country.

Wolves’ Hwang Hee-chan is also an important figure for the Tigers of Asia.

South Korea’s best World Cup performance saw them reach the semi-finals on home soil in 2002 — can they match that result in the Middle East?

Shortly after the World Cup Draw, sportsbooks are expected to hang group odds for each team to advance from the group stage.

The first-place and second-place finishers in Group H will move on to the Round of 16.

They will face off against the two teams to advance from Group G on Monday, Dec. 5, and Tuesday, Dec. 6.

The official FIFA 2022 World Cup match schedule outlines the following knockout pairings for the Round of 16 through to the final:

World Cup Round of 16