Home Cricket BCCI GT vs RR Highlights: We will come back stronger, says Buttler after... 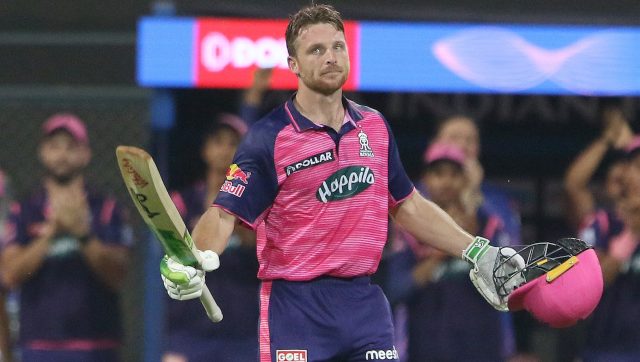 The highest run-getter of the season, Jos Buttler is disappointed that Rajasthan Royals lost to Gujarat Titans in Qualifier 1 of IPL 2022 here at the Eden Gardens, but said that they still have a chance in the tournament.

“It’s one of the reasons we were desperate to finish in the top two; we’re still alive in the tournament and still got a chance.

We were disappointed today but we’ll dust that off. We’re still in the tournament,” said Jos Buttler in a post-match press conference.

Despite putting up a total of 188 Rajasthan suffered a defeat in Qualifier 1. Buttler smashed 89 runs off 56 balls.

He was the highest scorer of the match. An unbeaten 106-run partnership between David Miller and Hardik Pandya helped GT win the match by seven wickets.

“I was finding it tough to start with. Then Sanju Samson came in and was playing fantastically well from ball one, so tried to get him back on strike for a bit.

He took a lot of me. It wasn’t my most fluent innings, but I tried to hang in tough and stay in there, get a bit at the end and ride my luck,” Buttler added.

Also Read: GT vs RR Highlights: Shubman Gill feels he doesn& have to prove anything to anyone

“What I tried to do is just hang in there. I know at some point I trust myself to get away. Today it came very late in the innings.

Sometimes you hope it comes early. But I was determined to hang in there. It was a big game for us and batting first.

I don’t want to panic. I know the opposition will prefer me to panic and get out so I just try and hang in there, bide my time and pick a match-up when I get it,” he said.

Despite failing to defend the 189-run target Buttler praised the spin pair of Ravichandran Ashwin and Yuzvendra Chahal.

“Those two guys have been outstanding for us all season. We continue to back them.

This is a tough place for bowlers – seam or spin. If you’re just a little bit off, it’s a very small ground with a very fast outfield.

There’s lots of boundaries available on this particular ground. We knew it’s always going to be a little bit tough and bowling,” said Buttler.

The Sanju Samson-led Rajasthan Royals still have a chance to make it to the final if they get past the winner of the eliminator between Lucknow Super Giants and Royal Challengers Bangalore.