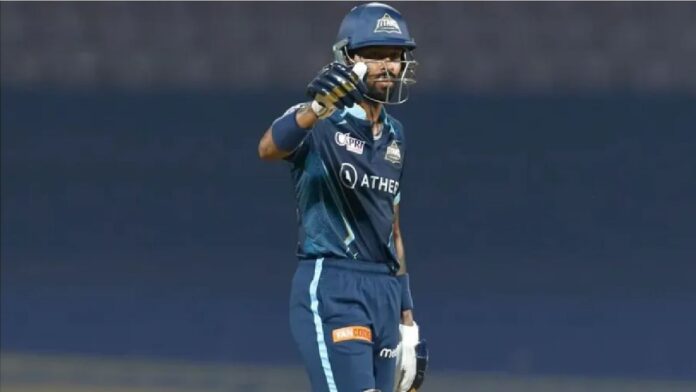 Gujarat Titans captain Hardik Pandya, after winning IPL 2022 title, said that his long term goal is to win the World Cup for India on Sunday.

The Gujarat Titans won the IPL 2022 in their first go with Hardik Pandya’s all-around performance of 34 runs and three wickets powering.

Them to a seven-wicket win in the final over inaugural champions Rajasthan here at the Narendra Modi Stadium.

“Absolutely to win the World Cup for India no matter what happens. I am going to give it everything I have. Always been that kind of guy, to put the team first.

For me, the goal will be simple, to make sure my team gets it the most,” said Hardik in the post-match press conference.

“Playing for India has always been a kind of dream come true no matter how many games I have played.

It has always been a pleasure for me to represent the country. The kind of love and support.

I have got is only from the Indian team’s point of view. Long term, short term, I want to win the World Cup no matter what happens,” added Hardik.

The right-hander had come close to winning a world title for India on three occasions, but all three ended in heartbreak.

2016, his final over against Bangladesh carried India into the semi-final of the T20 World Cup but India lost to West Indies.

The Champions Trophy final against Pakistan next year, he displayed some of his hitting abilities, but it was too little and too late.

In the semi-final of the 2019 world cup, Hardik and Rishabh Pant carried out a mini rescue after three early wickets, but New Zealand eventually prevailed.

Also Read: TATA IPL 2022: 3 Captains who won Man of the Match in FINALS

Hardik had won the IPL title every time he got into the playoffs. Four times as a part of Mumbai Indians campaign and now with Gujarat Titans.

Talking about his debut captaincy win he said “Obviously, this will be a little special because I have won it as a captain.

The four that I have won before this are equally special too. Winning IPL is always special. I consider myself very lucky that.

I have played five finals and have lifted the trophy five times. Obviously, this will leave a legacy because we are a new franchise.

Playing for the first time, and we are champions in the first season. But the four that I have won before this were equally special.”

Bowlers help you to win match said Hardik as he had this talk with coach Ashish Nehra that we should lean more towards the bowlers.

“Specifically, we both [Nehra and he] lean towards the bowlers. People say T20 is a batters’ game.

But I have always maintained that bowlers win you matches. Because if the batters don’t get a par score.

If you have a gun bowling line-up, the bowlers can pull things back. We have always given ten runs fewer. Even when others have conceded 190.

We have gone for ten fewer. Those ten runs win or lose you matches in the bigger picture,” said Hardik.”For me and Ashu pa [Nehra], when we were starting.

We wanted to create a strong and experienced bowling unit. So that even if there are times when batters don’t click, you can pull back with the bowling,” he added.