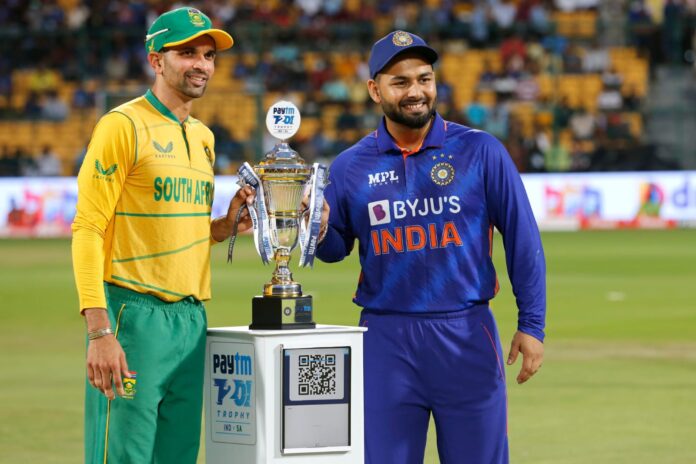 The fifth and final T20I between India and South Africa at M Chinnaswamy Stadium, Bengaluru has been abandoned due to rain.

The series stays level at 2-2 and will be shared by both sides before the action was interrupted by rain, India were 28/2 in 3.3 overs, with Shreyas Iyer (0*) and Rishabh Pant (1*).

Put to bat first by South Africa, India was off to a bad start. Under the first four overs openers, Ishan Kishan and Ruturaj Gaikwad were back in the hut.

After scoring 15 and 10 runs respectively. Proteas bowler Lungi Ngidi gave a big blow to the Men in Blue as he dismissed both the openers under the powerplay.

Notably, in the 4th match of the series, India defeated the Proteas by 82 runs to level the series. Put to bat first, India posted 169/6 in their 20 over

Largely powered by the efforts of Dinesh Karthik (55) and vice-captain Hardik Pandya (46). In reply, SA was bundled out for just 87.

Avesh Khan was the star for Men in Blue with the ball, taking 4/18. Ishan Kishan emerged as the most prolific batter in the series, scoring 206 runs in five innings at an average of 41.20.

With 2 half-centuries. His individual best score during the series was 76. Harshal Patel emerged as the leading wicket-taker in the series.

Also Read: IND vs SA 4th T20I Highlights: Lack of adaptability on our side: SA& Keshav Maharaj after loss against India

They taking seven wickets in five matches at an average of 12.57 and an economy rate of 7.23. His best bowling figures in the series are 4/25.