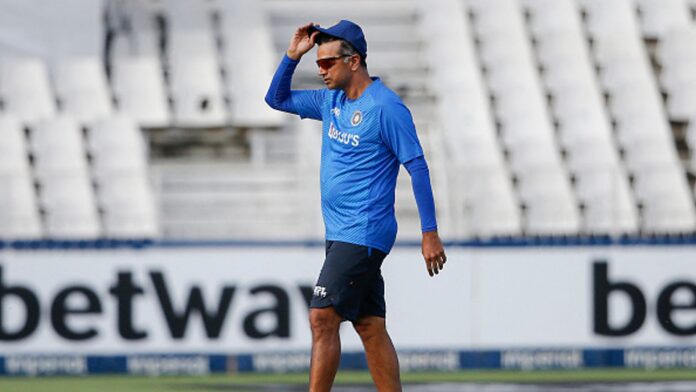 It was carried out during the fourth T20I against South Africa. Dravid’s statement came after the fifth and final T20I between India and South Africa.

At M Chinnaswamy Stadium, Bengaluru was abandoned due to rain. With this, the series stays level at 2-2 and will be shared by both sides.

Karthik had smashed 55 runs off 27 balls in the fourth T20I against South Africa in Rajkot. His knock helped Team India reach a defendable score of 169.

“He was picked for a very specific skill. And it’s nice when that’s kind of indicated in a sense that it came together brilliantly for us in the Rajkot game.

Where we needed that big performance in the last five overs to be able to make a par score. He and Hardik [Pandya] batted beautifully for us;

Both of them are our enforcers at the end, guys who can capitalise on those last five-six overs,” said Dravid after the fifth T20I got abandoned.

“They are probably two of the best in the world in those last five-six overs. So, yeah, it was really nice to see Karthik come off and do what he has been picked to do.

It certainly opens up a lot more options for us going forward. Innings like that certainly make you start. Like I was telling the guys.

It’s not about knocking the door – you have to start banging the door down, and an innings like that certainly means he is knocking very hard,” he added.

The head coach further backed skipper Rishabh Pant and said that he will remain an ‘integral part’ of Team India’s batting line-up.

“When you’re asking people to play a slightly more attacking brand of cricket in the middle overs and to take the game on a little bit more.

Sometimes it’s hard to judge based on two or three games. I thought he had a pretty good IPL. He might not have looked good on the averages.

But his strike rate was really good. He looked to move that up a little bit – to where he was probably three years ago,” said Dravid.

“We’re going to hope that we can get those kinds of numbers from him at the international level as well.

In that process, he might go wrong in a few games. But he remains an integral part of our batting line-up. We know what he does with the power he has.

The fact that he is a left-hander is very important to us as well in the middle overs. And he has played some good knocks. Of course, personally.

He would have liked to have scored a few more runs but it’s not that concerning. For us, he is certainly a very big part of our plans going ahead in the next few months,” he added.

Put to bat first by South Africa, India was off to a bad start. Under the first four overs openers, Ishan Kishan and Ruturaj Gaikwad were back in the hut.

After scoring 15 and 10 runs respectively. Proteas bowler Lungi Ngidi gave a big blow to the Men in Blue as he dismissed both the openers under the powerplay.

Notably, in the 4th match of the series, India defeated the Proteas by 82 runs to level the series. Put to bat first, India posted 169/6 in their 20 overs, largely powered.

By the efforts of Dinesh Karthik (55) and vice-captain Hardik Pandya (46). In reply, SA was bundled out for just 87. Avesh Khan was the star for Men in Blue with the ball, taking 4/18.

India will now be squaring off against Ireland for a two-match T20I series on June 26 and June 28 in Dublin.