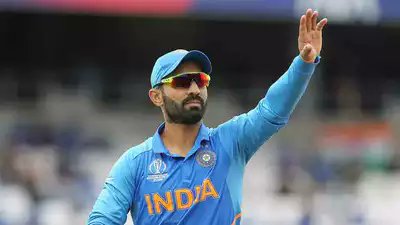 Veteran Indian batter Dinesh Karthik on Sunday penned down a heartfelt tweet after earning a call-up to the Indian team for the upcoming five-match.

T20I series against South Africa on the back of his brilliant performances for Royal Challengers Bangalore in Indian Premier League 2022.

The wicket-keeper batter took to Twitter and wrote, “If you believe yourself, everything will fall into place! Thank you for all the support and belief…the hard work continues…”.

The Team India recall comes for the 36-year-old player after his stunning performance For RCB in IPL 2022.

With the highest knock of 66 not out. Currently, Karthik stands third in RCB’s top-scoring chart behind captain Faf Du Plessis, and Virat Kohli.

In the series against South Africa, KL Rahul will captain the team and have the likes of players in the form of Rishabh Pant and Bhuvneshwar Kumar.

As well as Hardik Pandya, who is making a return to the Indian team after a long period. While top names like Virat Kohli and Rohit Sharma will be missing.