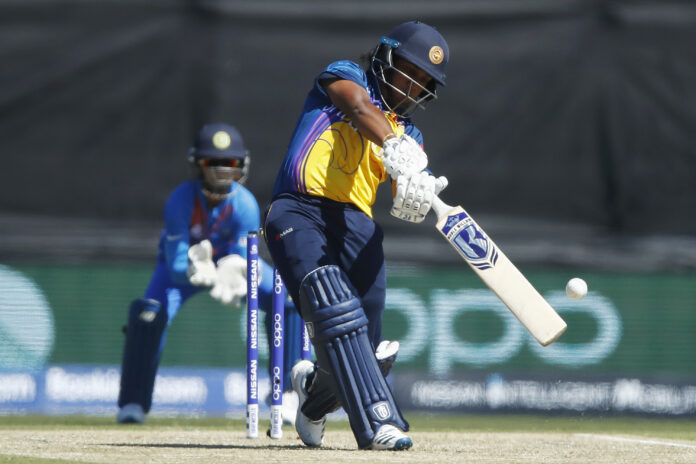 There was finally something to cheer for Sri Lanka as their captain Chamari Athapaththu slammed an unbeaten 80 to help her side register.

A thumping-seven wicket win over India in the third and final T20I match of the series at the Rangiri Dambulla International Stadium here on Monday.

Sri Lanka’s strong performance came a little late as they have already lost the series 2-1 to India. Chasing 139, Sri Lanka was not off.

The most ideal start, losing opener Vishmi Gunaratne for five at the end of the first over with captain Harmanpreet Kaur taking a good catch.

Captain Chamari Athapaththu and Harshitha Madavi tried to stabilise the innings and their 31-run partnership was broker by Radha Yadav. Madavi was out on 13 off 14 balls.

After Mandhana took a catch at deep mid-wicket. This brought Nilakshi de Silva to the crease. She along with Athapaththu attacked.

The Indian bowlers to attack, with the captain looking good in particular. The duo brought up a 50-run stand with a four in the 12th over.

On the very next ball, captain Athapaththu slammed medium-pacer Simran Bahadur for another four, bringing up her half-century. The partnership was broken.

After Silva was run out for 30 off 28 balls. This also ended the 77-run partnership between her and Athapaththu. Kavisha Dilhari was the next on the crease.

She and her captain took Sri Lanka to the target, finishing at 141/3 in 17 overs, with Chamari Athapaththu remaining unbeaten at 80 and Dilhari on 7.

Renuka Singh was the leading bowler for India with figures of 1/27 in four overs. Radha Yadav also took a wicket.

Earlier after choosing to bat first, solid knocks from captain Harmanpreet Kaur (39*) and Jemimah Rodrigues (33) took India to 138/5 at the end of 20 overs.

The final T20I against Sri Lanka. Opener Shafali Verma (5) fell cheaply to spinner Sugandika Kumari. It was then that a solid 43-run stand between opener.

Mandhana and Meghana respectively reducing India to 51/3. From then onwards, captain Kaur and Rodrigues put a solid 65-run stand.

Kaur then took the innings forward with Pooja Vastrakar, who was run out on the final ball of the Indian innings. Kaur finished at 39*, while India finished at 138/5 in their 20 overs.