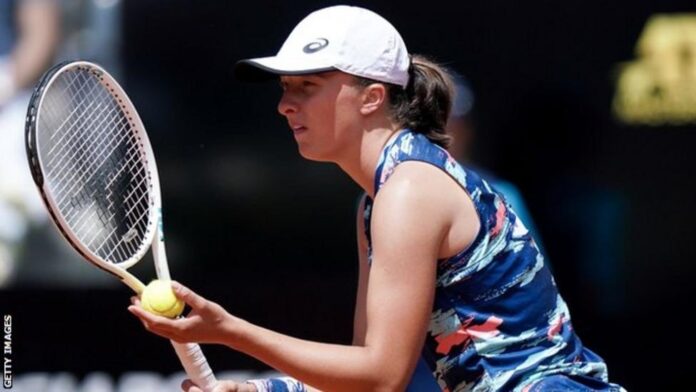 World No.1 Iga Swiatek advanced to her fifth consecutive WTA Tour final on Saturday, defeating No.8 Aryna Sabalenka 6-2, 6-1 in the semifinals of the Italian Open 2022.

The polish star swept aside four-time WTA 1000 winner Sabalenka 6-2, 6-1 despite disruption to her rhythm when the Belarusian received a medical timeout at 4-1 in the second set.

World number one Swiatek defeated Sabalenka in one hour, 16 minutes in Rome to claim her 27th win on the bounce, a tally last reached by Serena Williams in 2015.

Swiatek put in her best performance of the week to suffocate Sabalenka from the baseline.

Swiatek set the tone by breaking Sabalenka in her first two service games to build a 3-1 lead.

Swiatek kept a clean sheet with five winners to six unforced errors and sealed the opening set in just 31 minutes.

The Belarussians tried to be aggressive and hit the ball hard but it did not matter in the end.

Swiatek jumped out to a 4-0 lead in the 2nd set almost making it 5-0 but Sabalenka won her serve.

The 20-year-old Polish star finished it off with 6-1 in the 2nd set to move on to the final.