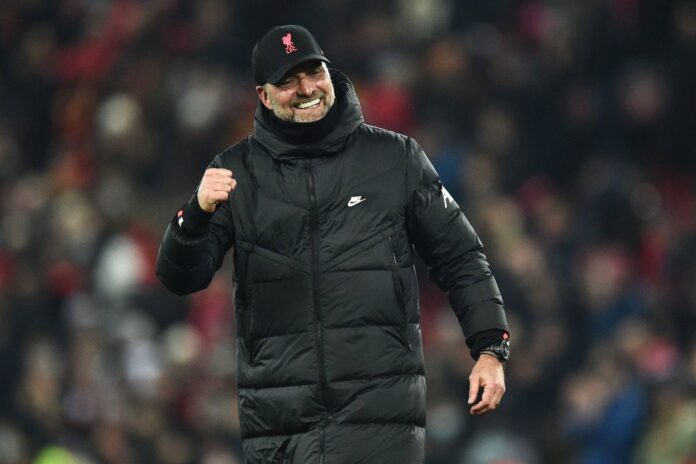 Jurgen Klopp is frustrated about the EFL Cup semi-finals being played over two legs after Liverpool set up a tie with Arsenal.

The Reds showed great character to come from two goals down to draw 3-3 at home with Leicester City in Wednesday’s quarter-final contest, subsequently going on to win in the penalty shootout.

Diogo Jota scored off the bench in the second half and Takumi Minamino levelled with almost the last kick of the game – he would have sealed progression had he not missed his penalty, but Caoimhin Kelleher then denied Ryan Bertrand and the Reds’ Portuguese forward got the job done.

The semi-final draw pits Liverpool against Arsenal in a double-header to be played during the first two weeks of 2022, and Klopp – who has routinely spoken out about player welfare this season – does not see why it cannot be played over 90 minutes.

“Yes, I think it would be better with one game, absolutely,” Klopp told reporters afterwards.

“But obviously what I say is not too important, so if there are two games then we play two games.

“It would be helpful if it was only one, true.”

On the wider issue of player welfare, Klopp revealed managers are due to take part in a Premier League meeting on Thursday afternoon.

However, he opted against going into too much detail for fear of creating headlines.

“The only thing I do with my messages is I create headlines. They never arrived at the right places,” he said. “We have tomorrow at four o’clock a meeting, but it’s with the Premier League – not with EFL, I am not sure if these people are involved or not.

“I don’t speak about player welfare [just] this year, I speak about it for six years – or maybe longer. It’s like it is.

“If the things I say would help more I would say them much more often, but it doesn’t help – it would just now create another headline.

Arsenal to take on Liverpool in Semis

“I said it, I would prefer only one semi-final [leg]. The draw is we play at Arsenal. I am fine with that – [if it was a one-off game] we play there, see who is better and go for it, but I can’t see any kind of changes actually.”

In a separate interview, Klopp again railed against the Premier League for the packed nature of the Christmas schedule. With Liverpool set to play on Boxing Day and then on December 28.

“Boxing Day is a wonderful game, no one would want to cancel that. But 26th and then 28th is absolutely impossible, it’s a joke that they still do it because it’s no problem to play 26th and then 29th,” he told ViaPlay.

“If 28th isn’t a matchday, who cares? People have enough to do with seeing families or whatever. Play 26th and 29th, it’s still the shortest of all possible breaks but it’s fine. 26th and 28th is just not right. It’s really dangerous for the players, it is.”