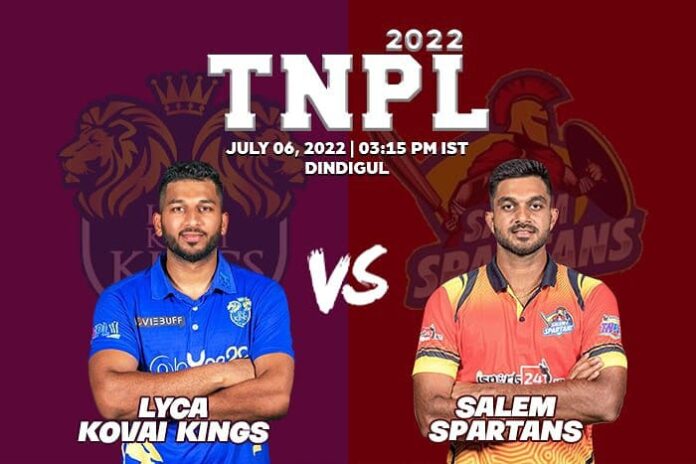 The eleventh match of the Tamil Nadu Premier League 2022 will have Lyca Kovai Kings and Salem Spartans going against each other.

Both teams are looking for their first win of the tournament. The Kings are placed at no 6 in the points table having lost both their games.

On the other hand, the Spartans are placed last after failing to win their only game in the tournament.

Kings put up a strong batting performance in their opening match scoring 188 runs. U Mukilesh was the top scorer with the bat scoring 49 off 25 balls.

Wicketkeeper-batter Suresh Kumar scored 37 off 24 balls and Ganga Sridhar Raju scored 33 off 28. But the bowlers let the team down.

As Dindigul Dragons chased the target with 4 balls to spare. R Divakar and Captain Shahrukh Khan picked up 2 wickets each. Suresh Kumar and U Mukilesh.

Also shined in the second match. Captain Shahrukh Khan has picked up 6 wickets in the tournament so far.

The Spartans batted first in their previous game against Nellai Royal Kings and were struggling with the bat. Their innings was held together.

By wicketkeeper-batsman R Kavin and Daryl Ferrario who scored 48 (27) and 60 (49) respectively. The Kings chased down.

The target in 17.4 overs. G Kishoor was the pick of the bowlers for Spartans picking up 2 wickets and giving away 40 runs in 3 overs.

So far in the tournament, teams batting second have found it easier. Both captains would be hoping to win the toss and bowl first as chasing under lights has been easy until now.