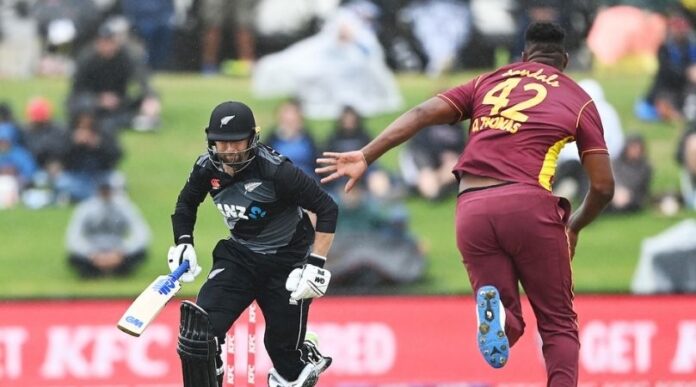 Of the three-match series here at the Sabina Park on Friday. Glen Phillips smashed 76 off 41 balls with six sixes.

A solid platform as Martin Guptill and Devon Conway smashed West Indies bowlers all around the ground. But the partnership.

Between the duo could not stand long as Guptill was dismissed by Obed McCoy after scoring 20 runs in 11 deliveries. Blackcaps skipper.

Kane Williamson could not do much and departed cheaply. Later Devon Conway was joined by Glenn Phillips who smashed Men in Maroon.

Bowlers all around the ground to keep the momentum going in their team’s favour. After smashing half-century, Phillips went on to 76.

From 40 deliveries and led New Zealand to 215/5. His blistering innings was decorated with six sixes and four fours. Chasing the target of 216,

West Indies could only manage to score 125-9 in reply. West Indie’s batter failed to stitch up the important much-needed partnerships.

Against New Zealand. The hosts’ best were stand for the seventh wicket of 35 between Romario Shepherd and Rovman Powell. Hayden Walsh (10)

Obed McCoy (23) put on 38 in an unbroken stand for the last wicket. The Men in Maroon failed to chase down the total and fell short.

90 runs to hand New Zealand the series and match win. The final T20I of the three-match ODI series will be played at the same venue on August 14.