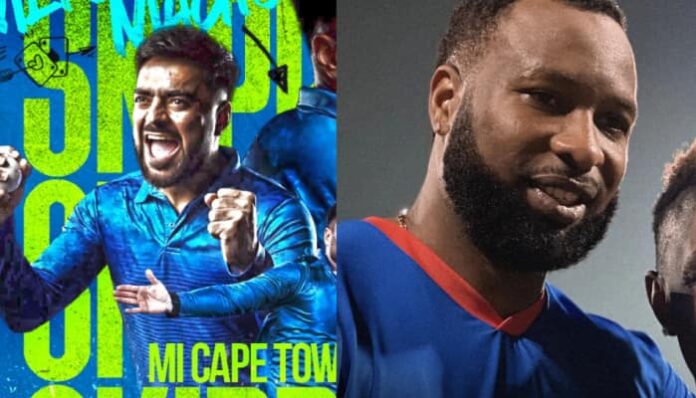 Afghanistan’s star all-rounder Rashid Khan has been named as the captain of the MI Cape Town team in the SA 20 League while West Indies captain.

Kieron Pollard has been named as the captain for MI Emirates which will take part in the ILT20 league. MI Global announced both the captains.

On Friday with a message from Akash Ambani, the owner of the franchises. “We’re extremely pleased to announce our captains for our extended.

MI Global one family for the cricketing season 2023. We have an amazing mix of talent, experience, and passion in both our captains.

I’m convinced that Polly and Rashid will take forward the MI ethos and MI brand of cricket. Both will work with our excellent coaching teams to.

Infuse the MI spirit in MI Emirates and MI Cape Town and win the hearts of cricket fans in UAE and South Africa,” wrote Ambani.

Rashid has never led a team in franchise cricket and it will be the first time he will be donning the captain’s hat in the league. Notably, he has captained.

Afghanistan before. However, it was a short stay as leader as he resigned from the post citing differences with the management.

On the other hand, Pollard is an all-time great at Mumbai Indians in the IPL. He has retired from the IPL, taking up a role of a coach.

With the same franchise as he said he did not wish to play for any other side in the competition.

This man. This magic. Our skipper Rashid. _ pic.twitter.com/8rJVuQxcEa

— MI Emirates (@MIEmirates) December 1, 2022
He will lead the MI Emirates side and while Pollard may have not led Mumbai Indians in IPL in many games, he was a part of the leadership group and.

Has led West Indies in the past too so the captaincy is not something entirely new to him. Pollard and Rashid as captains is a brilliant move by the Mumbai Indians.