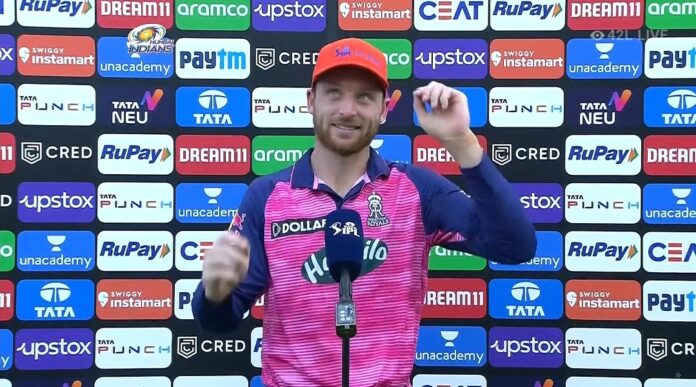 Rajasthan Royals opener Jos Buttler, who was adjudged as ‘Player of the Tournament’, was gutted after the defeat in the final.

The Indian Premier League against Gujarat Titans at the Narendra Modi Stadium in Ahmedabad on Sunday.

Buttler, who had a remarkable season with the bat, smashed 863 runs in 17 matches at an average of 57.53. Won the player of the tournament award as well as the orange cap this season.

“Disappointed – that’s completely natural. Have lost plenty of finals in my career, unfortunately,” said Jos Buttler in a post-match presentation.

They said that he had surpassed his own expectations in the season, becoming the second-most runs scorer.

An edition in the history of the tournament.”Exceeded all my expectations apart from today – the trophy we really wanted. Disappointed with that.

Big congratulations to Hardik and team. Deserving champions. My goals are to play my role for the team and try and react on the day.

Very grateful for the opportunity to play today,” Buttler said.Coming to the match, after posting a low-scoring target of 131.

Rajasthan had to produce a special effort with the ball to get back in the game. The pace duo of Trent Boult and Prasidh Krishna shone.

With the ball in the powerplay, reducing Gujarat to 31 for two with Wriddhiman Saha (5) and Matthew Wade (8) back to the pavilion.

Shubman Gill’s risk-free collection of runs and David Miller’s quickfire 32 not out powered.