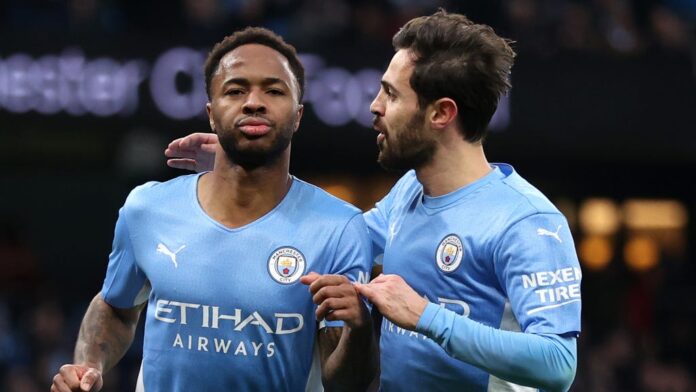 The Catalan coach ruled out signing a replacement for Ferran Torres this winter, and with his side in magnificent attacking form, why wouldn’t he?

Manchester City seem to have got over their goalscoring problems. A total of 17 goals in three matches would certainly attest to that.

It makes a big difference if you are going to have an inexplicable wobble like they did against Leicester City – conceding three goals in the space of 10 minutes – but more of that later.

Six goals against Leicester came on the back of four away to Newcastle and seven against Leeds for a remarkable, goal-laden 12 days of Christmas.

It has been a perfect response, because the threat to City’s title defence has always surrounded their lack of a guaranteed goalscorer, with coach Pep Guardiola admitting that City must cope without having a striker capable of scoring 30 times a season.

Man City on the top of points table

The City boss wanted a striker, of course, but their failed summer pursuit of Harry Kane meant he once again had to mastermind a challenge using a mixture of false nines, inverted wingers and attacking midfielders.

There were some easy victories early in the season, but many wins have been tighter than the comfortable scorelines that have become the norm during Guardiola’s reign.

There was even talk of the Premier League champions moving for a forward this January as Ferran Torres departs for Barcelona. But Guardiola was quick to shut that possibility down on Christmas Eve, saying: “No, we’re not going to bring in any striker in January.”

With everything seemingly now clicking into place, he was likely right to do so.

City’s players are sharing the goalscoring responsibility at a time of the season when it really matters, particularly with a Covid spike causing havoc with the fixture schedule.

Against Leicester, they had five different names on the scoresheet; in total, 19 players have now scored for the club this season.

Raheem Sterling grabbed two against the Foxes – he has now scored in four Premier League games running – to underline an impressive return to his best form.

A player that not too long ago was threatening to leave in search of game time has again become undroppable.

“He has been so aggressive in the one against one, his commitment to arrive to the box, he has been really good,” Guardiola said.

Kevin De Bruyne, Riyad Mahrez, Ilkay Gundogan and Aymeric Laporte scored the others as the goals were spread around.

If that was not enough, there were another five different scorers in the victories over Leeds and Newcastle.

Only at the start of the month, Guardiola was asked whether he was concerned that a lack of goals could potentially cost City the title.

City were a point clear at the top of the Premier League but had a worse goal difference than both Chelsea and Liverpool. Indeed, they were nine goals behind Jurgen Klopp’s free-scoring side, and now they are three ahead.

Guardiola had remained remarkably unconcerned, insisting the goals would come and preferring to focus on chances created rather than missed. Those opportunities are still being created and now they are being taken.

No need for striker, currently

City started in blistering form on Boxing Day and were four goals up inside 25 minutes, with Leicester unable to cope with the devastating movement of Sterling, De Bruyne, Bernardo Silva and Mahrez across the front line.

But then came the exceptionally sloppy part as City were caught to concede three goals on the break as the Foxes threatened to pull off an incredible comeback.

When opponents get their counterattack right they can cause City problems, and while Guardiola tried to dismiss those dodgy 10 minutes, behind closed doors it will be a concern and no doubt worked upon when they get back to the training pitch.

“It was a Boxing Day game,” he told BBC Sport. “It was a nice game to watch and three more points. We keep going.

“The quality of players we have produced this amount of actions to score goals. No manager and tactics can solve it without the quality.
Guardiola says City never in control in Leicester win despite 4-0 lead – This video will start in0:08

Guardiola wants the perfect mix of lots of goals and none conceded, but it is hard not to focus on the positives as they head into the New Year.

City sit six points clear at the top of the table, albeit having played a game more, and have now won nine successive Premier League games amid a rush of goals.

Guardiola’s side are starting to look very ominous again.