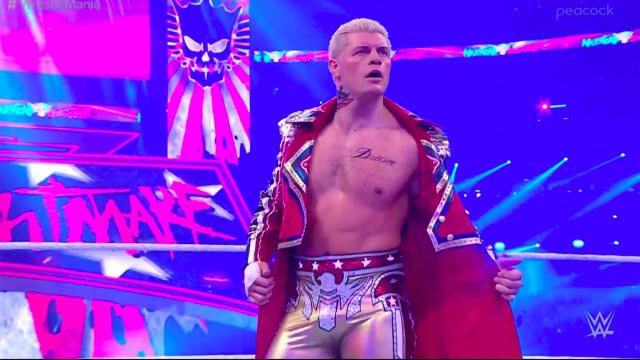 WrestleMania Backlash: Cody Rhodes wants to forget about Seth Rollins and go for the WWE Championship

Cody Rhodes was one of the protagonists of WrestleMania Backlash. He opened the main show by beating Seth Rollins in the opener.

He achieved victory by the count of three after a long fight in which both fighters were used thoroughly.

Rhodes was interviewed after his match by Sarah Schreiber backstage, where he discussed his victory and marked his next target on the schedule.

Cody made it very clear that his rivalry with Seth Rollins must end and that his next goal is the WWE World Championship.

He did not specify if he would challenge Roman Reigns, who currently holds both titles, but he did make his intentions clear.

“I have a long history with the Dunk (Dunkin Donuts Center). For those who don’t know about Botchamania or any of those stories… let people just look up ‘Cody Rhodes’ and ‘Dunk.’

I had one of the worst matches ever. all the time in this room. So tonight, to have a great appearance, to be able to feel.

The people and listen to them, it has been wonderful, “said Cody Rhodes on his fight against Seth Rollins.

There are some people around here, especially some fighters in the locker room.

it’s unfinished business for me and I just have to get on with it.” Rhodes noted about fighting for the WWE Championship.

“I’ll be honest, I’m not particularly excited about a win like that, having grabbed his tights.

Rhodes explained of how he went about getting the win. “I want the title and in order to get to it I think we can forget about this.

I really think Seth is an amazing superstar and I can’t wait to see what he does next.

He’s been on top of the mountain, he kicked me in the face, He beat me almost to death, but he didn’t beat me. So good luck with what he does next.”