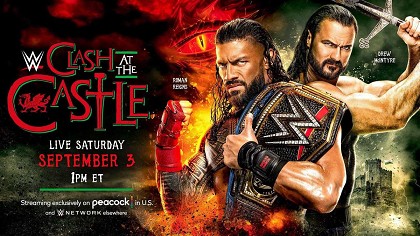 WWE Clash at the Castle: Roman Reigns to defend his Undisputed Titles against Drew McIntyre

Roman Reigns defeated Brock Lesnar at Last Man Standing held this morning at SummerSlam. The Tribal Chief survived a carnage that included everything from the intervention.

Theory and the Uso brothers, to The Beast’s use of a bulldozer. This victory allowed Reigns to defend and add 700 days as Universal champion.

The victory has also confirmed Reigns’ upcoming defense. He will face Drew McIntyre at Clash at The Castle, an event that will take place on

September 3, 2022 in Cardiff, Wales. This will allow Reigns, unless plans change, to defend the two titles that he has in his possession up to that date.

Which will allow him to achieve another great record as champion. On August 30, Roman Reigns will celebrate two years as WWE Universal Champion.

The SmackDown superstar managed to win the Championship on August 30, 2020 at the Payback event after defeating “The Fiend”

Bray Wyatt and Braun Strowman in a No Holds Barred match. Since then, he has kept the leash. Reigns has also held the WWE Championship for 119 days.

It is not common to see these types of records today. We have to go back to 1988 to find similar numbers, the year.

Hulk Hogan lost the title to Andre The Giant after holding it for 1,474 days. Previously, Reigns’ record was surpassed by the likes of Bob Backlund

Pedro Morales and Bruno Sammartino. In the modern stage, only Brock Lesnar would come close to this number with a reign of 504 days.