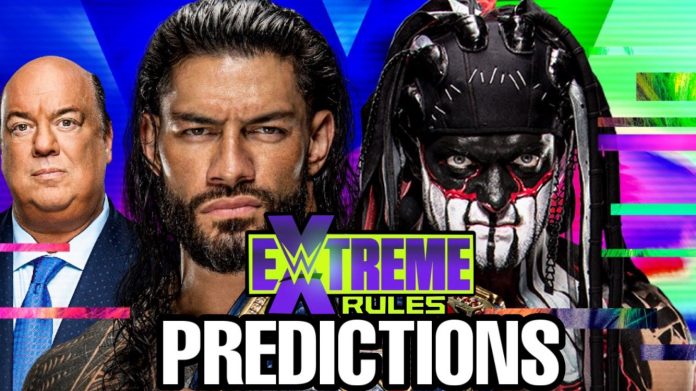 WWE Extreme Rules 2021 Prediction: The 2021 edition of Extreme Rules is currently scheduled for September 26th in Columbus, Ohio. This will be the next PPV event after Summerslam.

We have put together together some WWE Extreme Rules 2021 predictions, which includes the matches that we think will take place at the event and who will win.

WWE has officially confirmed a match between Carmella and Liv Morgan for this PPV.

As for the winner, we are going with Liv. We don’t see her losing.

6) The Usos vs The Street Profits

WWE has officially confirmed that The Usos and The Street Profits will be facing off at Extreme Rules. This will be for the Smackdown Tag Team Championships.

This should be a really good tag team match and we are looking forward to it.

We are going with The Street Profits winning the belts here.

WWE has officially confirmed Damian Priest vs Sheamus for this PPV. This will be for the United States Championship.

This should be a solid and hard-hitting match.

As for the winner, we will go with Priest winning to retain his belt.

WWE has officially confirmed a match between Charlotte Flair and Alexa Bliss for this event. This will be for the RAW Women’s Championship.

We are going to guess that we will get some sort of weird finish. My guess is that we probably won’t see either of them take a clean pinfall loss.

We will go with Charlotte keeping her title.

WWE has officially confirmed Becky Lynch vs Bianca Belair for this event. This will be for the Smackdown Women’s Championship.

This time, we hope that we get a full match between them. It could be really good.

We will go with Becky winning to retain her title.

Big E won the WWE Championship on RAW. This came after he cashed in his Money in the Bank briefcase on Bobby Lashley. A rematch now makes sense for the next PPV.

This should be a fun match for the PPV.

At the end of the match, we could see Goldberg showing up and attacking Lashley to continue their feud. This seems like an easy way to protect Lashley from taking another loss.

WWE has officially confirmed Roman Reigns vs Finn Balor for Extreme Rules. This will be for the WWE Universal Championship. It also looks like it will be ‘The Demon’ facing Reigns for this match.

Balor vs Reigns should be a fun match for the event. We could see it being one of the best matches of the night.

With ‘The Demon’ taking part, we are going with a screwy finish. This will come after Brock Lesnar interferes and attacks Roman Reigns. That will set up their match for Saudi Arabia. It will also save both guys from taking a clean loss.

What are your predictions for the event? Let us know in the comment section below and also on Twitter.