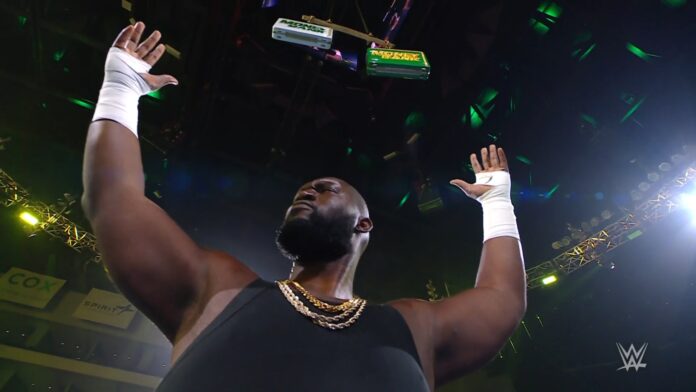 During the Monday Night RAW broadcasts on USA Network, wrestler Omos qualified for the men’s ladder match at Money in the Bank 2022, WWE’s next Premium Live Event.

This week’s episode in Lincoln, Nebraska featured a qualifying match between Riddle and Omos. The latter benefited from the damage “The Original Bro” took.

Against Roman Reigns and quickly finished the match for victory by three counts. “The Nigerian Nightmare” joins Seth Rollins, Drew McIntyre and Sheamus in the ladder match.

That will choose the next “Mr. Money in the Bank”. The winner will get a contract that he can exchange for a title fight at any time and place during a period of one year.

WWE Money in the Bank 2022 will take place on Saturday, July 2 from the MGM Grand Arena in Las Vegas, Nevada. Fans will be able to witness.

This event live from the stands, or through WWE Network (Peacock in the United States). Below is the updated billboard for the show to date.

Billboard WWE Money in the Bank 2022

Ladder match for the men’s Money in the Bank
Seth Rollins vs. Drew McIntyre vs. Sheamus vs. omos vs. three participants to be announced.

Ladder match for women’s Money in the Bank
Lacey Evans vs. Liv Morgan vs. Alexa Bliss vs. Rachel Rodriguez vs. Asuka vs. two participants to be announced.

Also Read: WWE Money In The Bank 2022: Undisputed WWE Tag Team Champions will be on the line between Usos and Street Profits