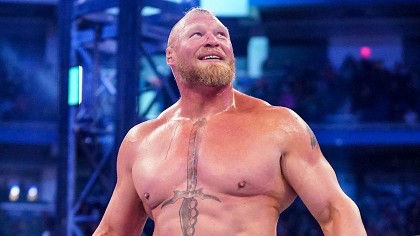 WWE News: Brock Lesnar is proud of the Paul brothers

The Unified Universal Championship, offering a good show, and even carrying out the spot of the night.The fight took its toll on Paul, who.

Ended up with an injury to his knee, damaging his medial collateral ligament and meniscus. Meanwhile, he recently posted a vlog of his.

Trip to Arabia on his YouTube channel, where Brock Lesnar makes a cameo appearance. In it, he congratulates the Paul brothers, of whom.

He points out that he is proud of what they have achieved. “I’m a little nervous because I’ve never done it before,” Paul said, referring to his.

Also Read: WWE Raw: Mick Foley reveals that his wife was not well received by the locker room at the beginning of his WWE

It should be remembered that Paul signed a multi-year contract with WWE this past summer, which will allow him to play several matches.

In the company. His first rival was The Miz, whom he defeated at WWE SummerSlam. The fighter showed his desire to be a face in this new stage of his.

career in the world of sports. However, the public still does not agree with it, booing him in each of his appearances.Currently, the youtuber continues.

To recover from his knee injury, although it has not turned out to be as serious as initially expected, so Paul’s rehabilitation is progressing favorably.

Meanwhile, he is already beginning to think about his next fight. In this sense, the latest reports indicate that Logan would have asked Triple H to face John Cena at WrestleMania.