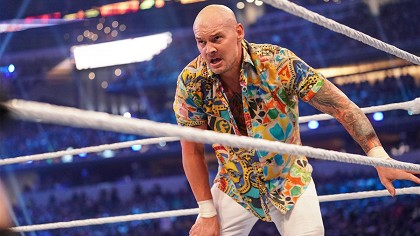 WWE News: Happy Corbin believes that WWE could have broken his End of Days streak at another time

Happy Corbin was one of the stars that graced the WrestleMania 38 card. He faced Drew McIntyre in a singles match and lost an undefeated match.

No one to date had gotten rid of his End OF Days, a movement that continues to apply today with which no one.

Who had received it had gotten rid of the count of three. But Drew McIntyre did it, and it’s something Corbin doesn’t quite agree with.

In an interview for Renee Paquette’s “Out of Character” podcast, Happy Corbin opened up by admitting that it didn’t sit well with him to lose his undefeated finisher to Drew McIntyre.

If it were up to him, he would have saved that moment for another time, possibly in a match against Roman Reigns for the WWE Championship.

“It wasn’t my decision, let’s just say that. I mean, honestly, we’re out of character here, and if I’m being 100 percent honest with you, I would have liked to save that for a bigger moment.

Also Read: WWE News: Naomi will make an appearance after her conflict with WWE in a well-known show

Something that selfishly would have benefited me.” Happy Corbin explained about the moment Drew McIntyre got rid of the count of three after receiving in End of Days.

“I think that benefited Drew McIntyre 100 percent, and I think for me I would have loved to save that for a big match against Roman Reigns.

A time when maybe I was getting a shot at a world title. But yeah , that broke my heart. It was very hard because that was something of mine.”

Happy Corbin remains one of the most relevant superstars in WWE, despite the fact that he has never achieved one of the highest positions in the company. After his rivalry.

With Drew McIntyre, he plunged into another with Madcap Moss, with whom he recently lost a series of matches, the last one on last week’s episode of Friday Night SmackDown.