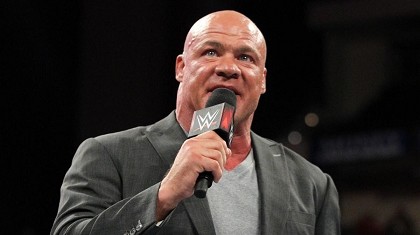 WWE News: Kurt Angle recalls his fight against Hulk Hogan in King of the Ring 2002

WWE Hall of Famer Kurt Angle discussed his match with Hulk Hogan at WWE King of the Ring 2002 on a recent edition of The Kurt Angle Show.

It was an extensive talk where the Olympic medalist commented on general aspects of the fight, its ending and some creative suggestions that Hogan made.

“I was very excited. I wasn’t nervous at all. I was absolutely euphoric to be able to fight the most popular guy in the history of the business.

Hulk Hogan was a household name when I was in high school and high school. He wasn’t even a I was a wrestling fan.

I knew who he was. My friends idolized him. Knowing I was going to be in the ring with him was a great opportunity. I was really excited.”

“I’ll tell you, there was something that Hogan wanted to include to make sure he got it right in case we continued with the story.

So what he said was, ‘When I get to the ropes, I’m holding on to them, holding on, and you take my hands off them.’ So what I was going to do.

If we were going to continue the story is go back to the ring and say, ‘I got to the ropes and you didn’t stop applying the lock, so that match was illegitimate.’

He wanted to make sure people realized that he really hadn’t given up. I was cool. I said, ‘Whatever you want to do, as long as you retire, that’s fine with me.’ strong”.

“It was a great honor to make him perform. It legitimizes you. I had only been in the business two years, and I had Hulk Hogan retire.

Also Read: WWE News: Booker T believes that bringing Brock Lesnar back is not a desperate move by WWE

This cemented me as one of the best talents in the company. I mean, he’s the fucking Hulk Hogan. He’s an icon”.