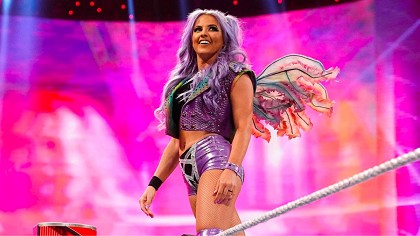 As we saw this Monday on Raw, we had the return of Johnny Gargano’s wife, Candice LeRae, to WWE. After finishing her contract with the company.

n the middle of this year and leaving the rings to have her first baby. However, her return to the rings was a complete surprise to the company’s fans.

As she handled herself with great caution behind the scenes. When the fight card for the last edition of Raw was leaked, Nikki A.S.H. A fight.

Against Doudrop was scheduled, but the one who really faced the Scotswoman was Candice LeRae, who defeated her, in her first appearance in the main.

Cast of WWE, since she was a free agent last May. However, with the arrival of Johnny Gargano to WWE again, a few weeks ago, it was expected.

That Candice LeRae would also return to the company, but the date was unknown, so seeing her in the past Raw was a big surprise.

Now we just have to wait for the next episodes of WWE Raw, to find out what the plans of the new creative regime are with Candice LeRae.

Which arrives at a very interesting moment in the women’s division. For now, in the October 3 edition.

Candice LeRae will fight Dakota Kai her second fight since her return. Below is the video of her return to WWE.