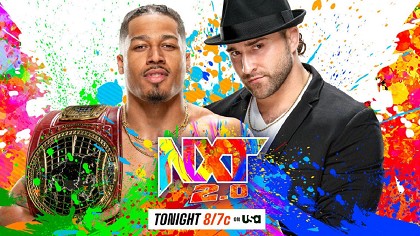 USA Network will broadcast a new episode of WWE NXT 2.0 today, June 21, with Vic Joseph and Wade Barrett at the commentary table.

Live from the WWE Performance Center in Orlando, FL. The show has several attractions, such as the confrontations.

Between Lash Legend vs. Alba Fyre and Grayson Waller vs. Sikoa only; and Carmelo Hayes vs. Tony D’Angelo for the NXT North American Championship.

The program begins with a video of the arrival of Carmelo Hayes with Trick Williams, and Tony D’Angelo with the D’Angelo’s Family in the parking lot of the WWE Performance Center.

Solo Sikoa vs. Grayson Waller
Waller arrives with a microphone and claims that Solo’s supporters are loners, and proceeds to give examples of why Sikoa is worse than him.

But is hit by Solo at just the right moment. Sikoa takes him from the ramp to the ring. Waller asks for mercy but Sikoa brutally punishes him against the ring.

With kicks to the chest. Sikoa gets distracted and Waller lands a few punches and whips him into a corner but Sikoa recovers and follows through on his attack.

Sikoa charges Waller, while the Australian takes the safety off the cornerback, and stamps him against the canvas with a slam. Waller dodges his throw into a corner.

But misses the lunge and subsequent lariat. Grayson changes roles and has Sikoa at his mercy but when they go to ringside, Sikoa finishes him off.

With an elbow to the jaw. After commercials, Waller has Solo on the canvas and kicks him, but Sikoa shakes him off and sends him powerfully into a corner.

Tony D’Angelo knows that Legacy chose the best place at his side and that tonight he will show Hayes the power of his family. But that Legacy must also prove his loyalty; so tonight they will fight.

Against Diamond Mine. On the other hand, if he doesn’t win the title tonight, they will suffer painfully. Santos Escobar reluctantly agrees.

Formerly known as Jordan Devlin, now JD McDonagh, travels on a route with his car and in a voiceover, he assures that NXT will soon find out why he decided to leave Dublin.

Kayden Carter and Katana Chance vs. Valentina Feroz and Yulisa Leon
Carter and Chance start out strong against the rookies, but Leon slowly gets the better of Carter.

Knocks her down multiple times with dropkicks and lariats. Chance enters to be of help to his colleague and receives a strong key from Leon.

Leon receives a combined punishment and takes over from Feroz, who gives Chance a Spear but Katana is saved with just enough.

Chance launches with a 450 Splash on Feroz and gets the win.
Winners: Kayden Carter and Katana Chance.

Wes Lee walks out to the venue in street clothes with a microphone in his hand. Lee appreciates the chants and the support from the public, since he is having a difficult time.

Since the last three months, and that he needs this. He went from being a two-time tag team champion and his whole world came crashing down in the blink of an eye.

But he explains that he turned that into rage and pain, something that consumed him and wasn’t himself. He confesses that he used Sanga and Xyon Quinn to prove himself and that he could hold his own.

And make him notice that he could outdo him. Trick Williams interrupts him and tells him to stop lying, that he abandoned his friend and that he is a lousy partner.

Lee replies that he has no idea what he feels, as he doesn’t know how hard they worked together to get to NXT. But he knows that he will never understand the relationship with his friend.

Since he is happy being second nature. Which gives Hayes a lot of hype but there’s nothing left for him. Williams refuses to go into the ring and leaves.

Tiffany Stratton sits backstage and talks about Wendy Choo. She claims that she is pathetic. That she really regrets the people who are close to that asshole, not for her, but for her fellow locker room mates.

She compares her behavior and then says that Choo’s is horrible. That she has never won anything, she has not even been to a gym.

Stratton claims that Choo cost her a match and thus she ruined her momentum. She warns him not to go back in or she’ll put her to sleep forever.

Diamond Mine (Roderick Strong and Damon Kemp) vs. Cruz del Toro and Joaquin Wilde (with Two Dimes and Stacks)

Kemp controls Cruz on the canvas, not letting him move. He takes over from Strong, who continues.

The punishment in the corners and on the canvas. Cruz manages to escape and takes over from Wilde, Strong to Kemp.

But the DM hits him against the canvas and has him locked. Strong’s slam to Cruz, both entered, but he can’t get to three on the count.

There is a miscommunication between Cruz and Wilde, product of a grab with Stacks’ cane, Strong takes advantage and connects Cruz for the win.
Winners: Diamond Mine.

Interviewed by McKenzie Mitchell, Giovanni Vinci assures that he is the supreme athlete of NXT.

That last week he sent a message in style and hopes that Bron Breakker or Carmelo Hayes, or whoever in the locker room has received it.

Everyone knows that a new star has arrived on the roster. Ikemen Jiro approaches him, laughs at him and asks if he has a strong style as well as style.

Toxic Attraction arrive in full at the venue. Mandy Rose takes the microphone and wants to make one thing clear. Roxanne Perez and her pals Indi Hartwell and Cora Jade are losers, even though they won last week.

Gigi Dolin adds that their Cinderella dream is over and now they will see reality. Jacy Jayne sends Perez over to her house and tells him to put up posters of stars like them in her bedroom.

Perez and Jade interrupt and Perez tells Rose that they have a challenge. That she won every one of her challenges and she is ready for the top of the world.

And that she will also win the tag team championships with Cora. Chance and Carter interrupt them and make sure they stay out of it because they have unfinished business.

That they are very tender but that they did nothing to deserve those titles. And they go to blows, while Toxic Attraction throws them out of the ring.

Carmelo Hayes assures behind the scenes that he doesn’t even care about Tony D, who has defeated each of his rivals and who is now a new victim for the A-Champion.

Kiana James interrupts an Indi Hartwell interview to ask why they’re wasting valuable time with her when there’s another star here. She claims that Hartwell is weak and lacks mental strength.

Which makes the women’s movement look bad. Indi replies that she has a lot of opinions but no one cares what she has to say.

And she challenges her to a match for the next week. James agrees and states that she will teach him a lesson. Indi replies that this is NXT 2.0 and that nobody wants a bitch.

Cameron Grimes vs. Edris Enofé (with Malik Blade)
Enofe goes all out for Grimes, not letting him move much or hit him, but the former North American champion knows.

How to move with a Hurricanrana throws Edris out and then an iron from the corner. Edris recovers from Grimes’ punishment and flies out of the ring to hit Grimes.

Climbing to the top of the corner and missing. Grimes applies a tremendous move and the Cave-In for the win.
Winner: Cameron Grimes.

Von Wagner vs. Brooks-Jensen
Wagner lunges at Jensen but Brooks nimbly dodges and lunges into the corner. At the point of blows to the head, he knocks Wagner down.

But Von recovers and lands a strong punch that leaves Jensen dazed. Wagner takes Jensen into a corner and slams Jensen’s injured hand against the post.

Jensen has no choice but to use his right hand, not giving up, but Wagner seizes the advantage and takes him down to continue the lock on his injured hand.

The punishment spread to his entire left arm, rendering it useless. But Jensen manages to break through with kicks and lariats with his good arm.

Aerial DDT but does not get the count of three. WAgner finishes Jensen out of nowhere with a slam against the canvas and takes the win.
Winner: Von Wagner.

Grimes recovers from the tough fight with Enofé and Bron Breakker tops him. Bron tells him that this is the combative Grimes that he likes, passionate and who leaves everything.

Cameron stands up and blurts out that he doesn’t think Breakker wants this Grimes, because he’s going to take the NXT Championship from him.

Joe Gacy meets The Dyad, somewhere dark. Gacy tells how his followers felt lost and insecure but that he was the one who showed them the light.

They have been reborn as other people. Gacy assures that they have tasted gold before but now they will do it again thanks to his hand.

Alba Fyre vs. lash legend
Fyre is not expecting anything and launches into a corner to punish Legend with kicks. Dropkicks and she is lying on the canvas.

Legend responds with a roundhouse kick and strangles Fyre with the ropes. Alba recovers and punishes Legend with DDT and kicks.

But her opponent is strong and applies several slams that leave her on the canvas. Facebuster and Fyre climbs the corner, Legend dodges the jump hits Fyre with a baseball bat.
Winner: Alba Fyre by disqualification.

Tony D’Angelo (with D’Angelo Family) vs. Carmelo Hayes (with Trick Williams)
Hayes tries to grab Tony by the neck and throw him, but the Don is stronger and resists the attacks well.

Tony D applies some blows to him with his leg and Williams wants to get in, however, seeing the amount of Tony’s family, he refrains. Tony blows Hayes up and crashes him into the canvas for chops.

The champion responds with a running lariat and a blow against the edge of the ring. Tony throws Hayes against the metal ladder.

After commercials, key to Tony’s torso on Hayes in the middle of the ring. Hayes hits him against a cornerback and applies several chops to his chest. A-Champion’s flying lariat and some head punches.

Tony recovers and hits Hayes hard, while he yells at him that he thinks he’s champion. Brutal slap from Tony and prepares to end the fight but Hayes blocks it with a kick and the Codebreaker.

That fails to finish the count. Tony’s rolling and tremendous flying slam that leaves Hayes lying on the canvas. Tony asks Santos for the mitt.

But Santos plays distracted and gives it to Hayes, who hits Tony when the referee doesn’t see him and takes the win. Winner and STILL champion: Carmelo Hayes.

Enraged by the defeat and betrayal, D’Angelo yells at Escobar to come back to settle scores but Escobar, Cruz del Toro and Wilde leave Tony alone with his colleagues.