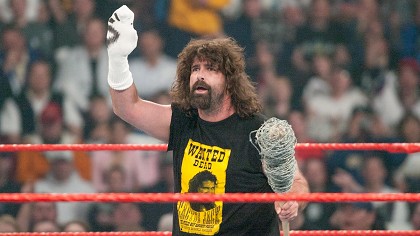 WWE Raw: Mick Foley reveals that his wife was not well received by the locker room at the beginning of his WWE

In a new episode of the Foley is Pod podcast, the WWE Hall of Famer Mick Foley revealed how the company’s locker room was treated.

In its beginnings, which he highlighted that it was not very good and that he was very upset about it during the first few months because I didn’t understand it was a rule.

On the day he took his children:

“She wasn’t comfortable at all, and that goes back to July 1996, when I took my kids on the road, I think for the second time. To be fair to WWE.

When I took them to Savannah, Georgia, my kids cried for ninety minutes. I had a chat with them outside: ‘You’re going to be nice to daddy, right?’

“But still, that had been a few weeks before, and now I’m bringing them to New England. I don’t remember if they were in Portland with me.

But they were definitely there the next night in Bangor. The agent-and I don’t need to name the agent-maybe went out of line not allowing my family backstage.

And led them into a bathroom with what appeared to be an open sewage pipe. And I don’t know why I didn’t get up right then and say ‘this doesn’t work’.

I was probably thinking: ‘I only have a few months in this company, I’m getting a push, I don’t want to rock the boat.'”

On the day he had to leave his wife alone on her birthday:

“It’s one thing to do that to me in July, but in November? It’s a very big thing. Working on my fourth PPV with The Undertaker. There was an edict.

‘No handcuffs backstage.’ She was celebrating her birthday. We traveled together to New York to celebrate. She was alone. I was going to go.

To the show alone. Again they told me no handcuffs. I appealed, even asked Jim Ross. They told me that was the rule. So my wife was left alone.

The whole day”. “And when I get to the show, I was in the building at one. To me, there was no reason why my wife couldn’t be there until six.

And then find her seat. But that’s not the case. So if the edict is followed by everyone, that’s one thing.

But if you show up and see other wives or a partner who’s known the fighter for 24 hours or less. That’s a problem.”