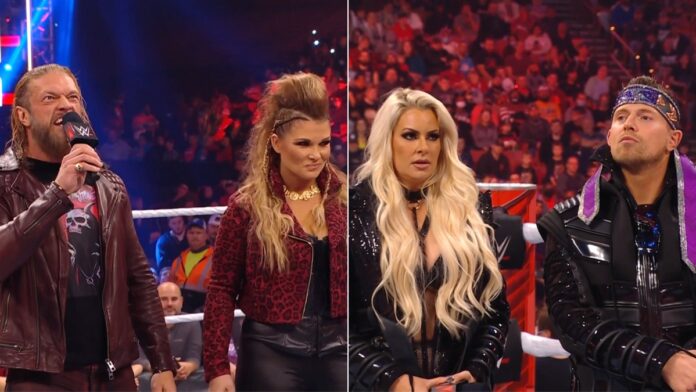 During the Monday Night RAW broadcasts via USA Network, it has been confirmed that Edge and Beth Phoenix will face The Miz and Maryse at Royal Rumble 2022, WWE’s next pay-per-view.

After his defeat at the hands of Edge on Day 1, “The Awesome” appeared alongside his wife to label his rival a coward for having used his wife to win. “The Iconoclast” and “The Glamazon” interrupted The Miz by clarifying that Beth’s breakthrough was her idea. Edge proposed a tag team match at the next pay-per-view, being accepted by Miz despite Maryse’s refusal.

WWE Royal Rumble 2022 will take place on Saturday, January 29  from The Dome at America’s Center in St. Louis, Missouri.

Fans will be able to witness this event live within the venue, or through WWE Network (Peacock in the United States) and pay-per-view. Here is the updated billboard for the show to date.

Mixed Team Match
The Miz and Maryse vs. Edge and Beth Phoenix