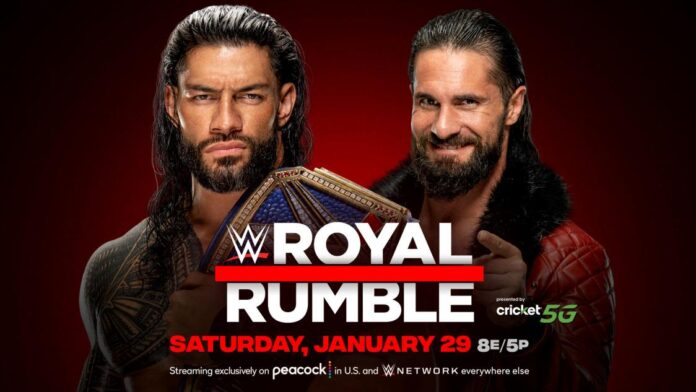 WWE Royal Rumble 2022: Roman Reigns and Seth Rollins might just be destined to do this forever.

As two of the most accomplished Superstars in WWE. The Head of the Table and The Visionary have spent the better part of a decade sharing the squared circle as allies and adversaries.

Nevertheless, their title showdown at the Royal Rumble event on Saturday, Jan. 29, will be their first collision since October 2019 on an edition of Smackdown. And it will also represent the first time that they’ll be waging war for the Universal Championship in a singles match.

Rollins, in fact, has been hovering around the Universal Title picture for nearly a year, lobbying unsuccessfully (until now) for a one-on-one title match against his former friend. After heading to Monday Night Raw in the 2021 WWE Draft. It seemed like their showdown might never happen.

That all changed, however, when WWE Official Adam Pearce was tasked with naming an opponent for the Universal Title for the Jan. 29 Premium Live Event.

Arriving at Reigns’ locker room door with a knock that strongly resembled the classic Shield entrance music. Rollins came face-to-face with his former brother-in-arms and let out a maniacal laugh. And the rest, as they say, is history.

The Big Dog’s track record speaks for itself, as challenger after challenger has fallen at his feet, including Brock Lesnar, Finn Bálor, John Cena, Edge, Kevin Owens, Rey Mysterio, Cesaro and more. Can he overcome by the Superstar who knows him better than anyone else?

What will happen when the former partners throw down for the Universal Title?