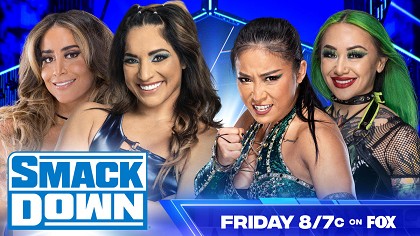 Raquel Rodriguez and Aliyah defeat Shotzi and Xia Li on the Friday Night SmackDown broadcasts and advance to the semifinals of the tournament.

For the WWE Women’s Tag Team Championships, for the blue brand box. Next week they will face the winners of

Nikkita Lyons and Zoey Stark vs. Natalya and Sonya Deville. In the final moments, Raquel took over from a battered Aliyah and dominated.

Both rivals, although she suffered a bit with an elusive Shotzi. However, she lunged at Xia Li, taking her on top of her and powerbombing her for the win.

The alliance between Raquel Rodriguez and Aliyah surprised many, since the latter was not having a great participation and was the first.

Eliminated from the Gauntlet Match for a chance at the SmackDown Women’s Championship last week, but with the company of Raquel.

Your situation could improve. However, Shotzi and Xia Li already had a short but effective run as partners in recent weeks into what could prove.

To be a tough matchup for them. On the WWE Raw side, IYO SKY and Dakota Kai advanced to the semifinal of the tournament.

After defeating the team made up of Tamina and Dana Brooke. They are still waiting for their rivals, which will be decided next Monday.

When Alexa Bliss and Asuka face Doudrop and Nikki A.S.H. The best tag team on RAW will meet the best on SmackDown to crown the new WWE Tag Team Champions.