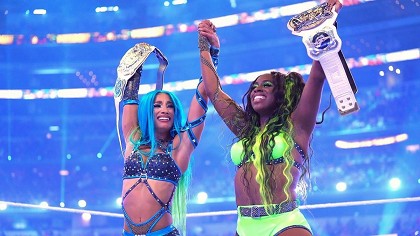 Both couples came from a few weeks of roughness and clashes between them, either by teams or individually, but after WrestleMania 38.

The title match between these four was officially agreed for the week after WrestleMania Backlash.

The fight was quite lively and the four had a great participation, wanting to take a slice of the championships.

Also Read: SmackDown Highlights: The Usos accept RK-Bro&s challenge and will unify the Championships next week on WWE SmackDown

However, a mistake by Natalya in the closing moments cost her.

The match and Naomi hit her with the finisher to take the win and retain the Women’s Tag Team Championships.

Naomi and Banks have been reigning for 41 days, since capturing the titles at WrestleMania 38: Sunday in a four-team match.

They then defended the titles on RAW against LIv Morgan and Rhea Ripley, until they cemented their rivalry with Shayna and Nattie.