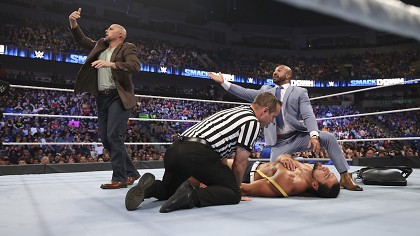 The rivalry between Happy Corbin and Madcap Moss seems to have not come to an end yet. After Corbin’s defeat at the PPV, WrestleMania Backlash, at the hands of Moss.

Both fighters met again in a segment last night on WWE SmackDown. Madcap Moss was interviewed by Kayla Braxton about his PPV win.

During this interview, an irate Happy Corbin stormed the scene and hit him with multiple.

Saddle blows to the back before putting his neck in one of these and hitting him with the trophy from the Andre.

The Giant Memorial Battle Royal, which Moss won at the SmackDown show prior to WrestleMania.

Moss had to be carried out of the arena on a stretcher. Hours later, WWE provided an update on the state of Madcap Moss’s health.

After Happy Corbin’s attack. The company said the fighter was taken to a local medical center for further examination.

It is unknown if Madcap Moss will appear next week on SmackDown. Injuries in WWE programming.

A routine resource to advance storytelling and rivalries. It should be noted that Corbin has already been involved in this type of rivalry.

Where he takes a fighter out of action so that weeks later he returns, as happened in his previous rivalry against Drew McIntyre.