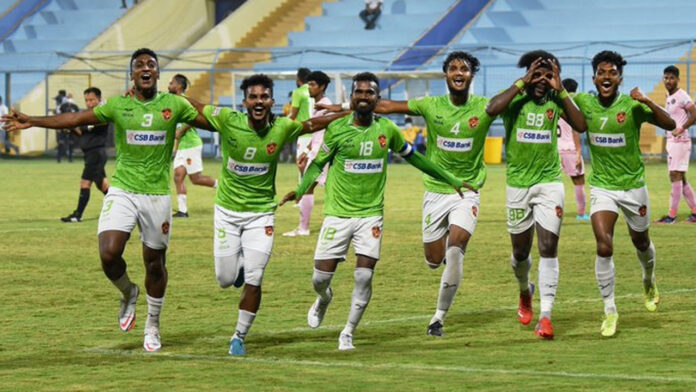 I league News: Gokulam Kerala on brink of I-League title after narrow win over Rajasthan United

A hard-fought 1-0 victory for Gokulam Kerala over Rajasthan United restored the six-point advantage for the league leaders, here at the Naihati Stadium.

Both defences were on top of their game as one breach in Rajasthan’s backline allowed Gokulam to snatch all three points.

The first chance of the half fell to Jourdaine Fletcher as the Jamaican stood over a free-kick.

After a Mauro Dos Santos foul on Ahmed Razeek. Fletcher struck the wall with his effort as Rajasthan heaved a sigh of relief.

Hitting the 10-minute mark, Gokulam keeper Rakshit Dagar came racing out to clear the ball away before it could reach Alocious.

The keeper won the race but his desperate header went straight to Biswa Darjee, who scuffed his chance as the wayward shot was the nowhere near goal.

Ten minutes later, a series of good crosses into the Gokulam box were defended well by the league leaders. On the counter, Emil Benny played a brilliant low ball into the path of Jithin MS.

The Gokulam skipper aimed his header at the far post, and beat the keeper but could not beat the crossbar.

Shortly after the miss, Fletcher was found in the box by a good ball from Razeek but the striker was denied by Bhaskar Roy.

A foul right on the edge of the box allowed Gokulam a good opportunity to score the opener.

The league leaders did manage to capitalise on it as Razeek played a perfect cross into the box and an unmarked Fletcher headed home Gokulam’s opener.

Six minutes later, Rajasthan almost pulled themselves level from their fifth corner of the game.

Anil Chawan got his head to the ball right in front of goal but Dagar’s point-blank block with his feet kept Gokulam’s lead intact.

In the closing stages of the first half, Ricky Shabong’s shot from the right side was palmed away by Dagar.

The ball initially came to Pritam Singh, who was marked and failed to make contact with the ball.

On the follow-up was Abhishek Ambekar, who blasted his effort into the stands as Gokulam escaped with another let-off.

Two minutes into the second half, Fletcher tried to get his season’s goal tally into double digits.

But the striker’s attempt skimmed across the face of the goal and was off-target.

Unable to enter the Gokulam box, Sardor Jakhonov attempted a screamer. However, the ball did not dip enough to creep under the crossbar.

The high line and high press from Gokulam disallowed Rajasthan United attackers to probe into the box.

As a result, Rajasthan kept trying their luck from a distance as Jakhonov attempted another long-ranger three minutes after the hour mark.

Sreekuttan VS replaced Razeek minutes before the hour mark and added to Rajasthan’s frustration.

The midfielder attracted challenges from Dos Santos and Ambekar that got both players into the referee’s book.

A minute from time, Dos Santos and Sreekuttan came together again as the latter tried to wriggle past.

The defender and went down. The referee did not hesitate to reach for his pocket again and flashed a second yellow.

For Dos Santos as Rajasthan United were reduced to ten in the closing stages of the game.

The scoreline will not be a matter of concern for Gokulam Kerala as the three points have.

Rajasthan United are now four behind Sreenidi Deccan and three ahead of NEROCA, having played a game more.