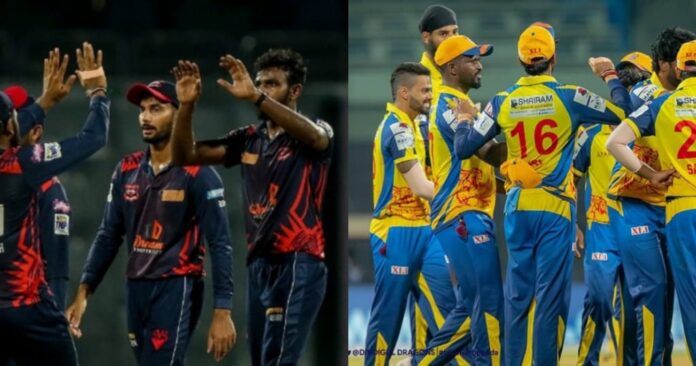 Tamizhans are ranked third on the points table with one in their solitary game while the Dragons are ranked fifth with one win in three games so far.

Tamizhans won their opening game against Ruby Trichy Warriors by 4 wickets. The Warriors batted first and set up the target of 158 for the Tamizhans.

Aswin Crist was the pick of the bowlers who got 2 wickets for 41 runs in his 4 overs. Tamizhans chased the target easily with 7 balls to spare.

Subramanian Anand scored 35 off 26 and wicketkeeper batter Tushar Raheja scored 42 off 26 balls. M Mohammed was awarded ‘Player of the Match’ for his all-round show.

As he picked up 1 wicket and scored a quickfire 29 off 15 balls. The team will be looking to continue with their winning momentum in the second match as well.

After having a disappointing start to the tournament in their opening match against Ruby Trichy Warriors, Dindigul Dragons made a strong comeback in their second match.

Against Lyca Kovai Kings as they chased down a mammoth score of 189 with 4 balls to spare. But the Dragons couldn’t continue with.

Their winning momentum and lost their next game against Nellai Royal Kings. They will be looking to make a come back to get the momentum back.

Captain Hari Nishanth has been in terrific form for Dragons with scores of 25, 60 and 37 in the tournament so far.

Teams batting second have won most of the games in the tournament so far. Batters enjoy batting.

With a set target in their mind on this wicket. Hence, both the captains will be looking to field first.