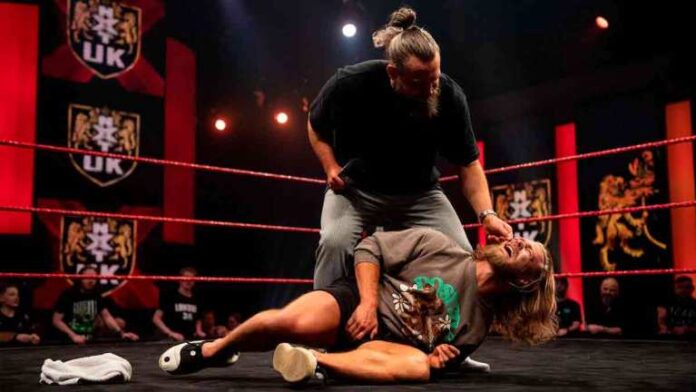 After an exchange at the canvas level, Turan took down his rival and took control. The masked man applied a Clothesline and the referee made the X sign.

By means of a video the return of Blair Davenport was announced.

Grace landed the first few punches, but Legend reacted with an Uppercut on the ropes and avoiding a Crossbody. The NXT USA fighter punished her rival and ended up closing the match with a Big Boot.

Sarray, Brooks Jensen, Josh Briggs and Fallon Henley announced that they were going to be in NXT UK.

Wolfgang and Damon Kemp vs. Sha Samuels and Noam Dar

Samuels started the match with Kemp. The US player took control and Dar entered. Kemp was able to dominate over his rival and the two gave the relay. The faces punished Samuels with quick relays. Dar was able to land.

A series of kicks and took advantage of a distraction from Kemp to drop him with a right hand. The heels took control of the fight punishing the Diamond Mine fighter.

Wolfgang took over after several minutes and performed the hot tag. The Gallus wrestler took Samuels down and applied a Spear for a count of two.

Dar and Samuels teamed up to apply a Big Boot followed by a variant of Suplex. Kemp took over and ended up closing with a Running Powerslam.

Victory: Wolfgang and Damon Kemp by count of three.

Trent Seven made his entrance to the ring and began a speech that sounded like a goodbye. The NXT UK fighter asked for his partner’s entry.

Tyler Bate did not take long to enter and Seven continued with his speech thanking Bate for accompanying him during his career and recalling his achievements.

Seven got emotional during his speech and ended up hugging his partner and then applying a low blow. The veteran attacked his old partner and applied a Birminghammer.