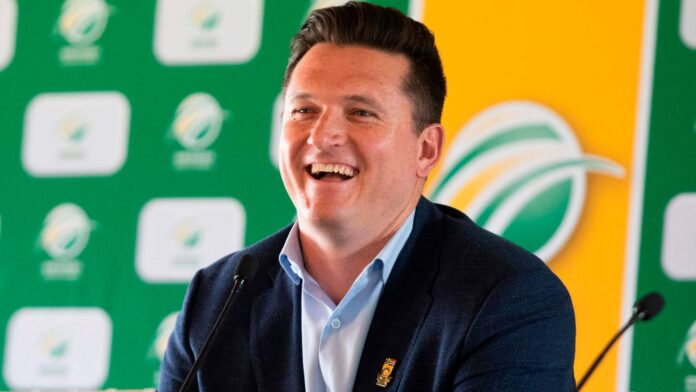 Former South Africa captain Graeme Smith says the Proteas have a difficult decision to make regarding whether to select Faf du Plessis for this year’s ICC Men’s T20 World Cup.

Du Plessis is among a group of players that are no longer contracted by Cricket South Africa and it remains to be seen whether any free agents.

They will be selected to play for the Proteas at the T20 showcase that starts in Australia in October. Smith was Director of Cricket at Cricket South Africa.

When it was decided that free agents would not take part in last year’s event in Dubai and a similar decision now awaits selectors ahead of this year’s tournament.

“South Africa have got an equation where they have to figure out what their best XI is. Players are playing in leagues around the world.

How much time can he (du Plessis) give to South Africa in the lead-up to the World Cup,” said Smith on Star Sports.

While du Plessis has long been retired at the international level in the longer forms of the game, he is yet to officially call it quits.

At 20-over cricket despite his most recent appearance for South Africa coming at the end of 2020. His talent remains unquestioned and du Plessis.

Still well renowned as a big game player having shown plenty of star qualities in the last two editions of the IPL. Last year du Plessis produced a brilliant knock to help.

Chennai Super Kings to a fourth IPL title, while in 2022 he scored 468 runs to help Royal Challengers Bangalore past the Eliminator stage of the tournament.

Du Plessis has also been pivotal for the Proteas previously at the T20 level, with the 37-year-old having scored the fourth-most runs.

The country in 20-over cricket. “Do they pick him straight for the World Cup or should he part of the build-up where he understands the team culture.

The thinking, training and preparing,” said Smith. “India doesn’t face that challenge but for other nations (dealing with) free agents is a difficult one.

We know Faf has the ability, the team has to decide. How much time he needs to spend with the team,” he added. Smith said he hadn’t spoken to du Plessis recently.

They was unsure whether the former skipper would be interested in committing to play the four-week long tournament in Australia.

“Maybe he is in that phase of his life where is happy to play the leagues, he is retired maybe from international cricket, maybe that’s where he wants to be,” Smith said.

The T20 World Cup commences on October 16, with South Africa’s first match coming on October 24 in Hobart against a qualifier from the first round.