Home Cricket BCCI WI vs IND 3rd T20I Highlights: We lost the game but did... 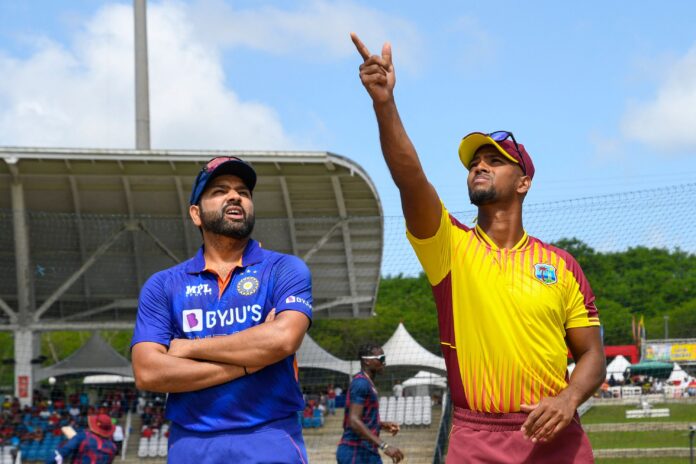 WI vs IND 3rd T20I Highlights: We lost the game but did a lot of right things: Nicholas Pooran after loss to India in third T20I

Following the seven wicket defeat to India in the third T20I, West Indies captain Nicholas Pooran said that even though his side lost the game, it did a lot of right things.

A brilliant half-century from Suryakumar Yadav and his stand with Shreyas Iyer powered India to a seven-wicket win over the hosts.

West Indies in the third T20I of five-match series on Wednesday. “Felt we had to get early wickets. Didn’t do that. We felt like we had enough.

India bowled well. Wicket was on the slower side, felt it was difficult to keep scoring on it. Would’ve been a different game had we got early wickets.

We kept losing wickets in the middle overs. We lost the game but did a lot of right things. Felt like we were 10-15 runs short. But early wickets could’ve.

Changed the game today,” said Pooran in a post-match presentation. The hosts are bound to be unhappy with their performance.

As they lost the game due to losing a lot of early wickets and no major middle-order partnership. The West Indies put on a total of 164 runs in 20 overs.

With a major contribution from opener Kyle Mayers who scored 73 runs. The West Indies got off to the good start as the opening duo Brandon King.

Before being dismissed by Bhuvneshwar. Rovman Powell was sent back to the pavilion after scoring 23 runs in 13 deliveries.

Shimron Hetmyer played a knock of 20 runs to give his team a respectable total as the lower order failed to click. Chasing a target of 165.

The Men in Blue got off to a great start as their openers Rohit Sharma and Suryakumar Yadav started playing aggressively. Rohit gave India.

A quick start but retired hurt in the second over after seemingly pulling a muscle in his waist or side. Shreyas Iyer then came to bat and tried to anchor.

The innings with Suryakumar. The star batter of India Suryakumar brought up his half-century in 26 balls.The duo took their team’s.

Total beyond the 100-run mark. The partnership did not last long as Iyer was dismissed by Akeal Hosein after scoring 24 runs in 27 balls.

Iyer’s wicket brought Rishabh Pant to the crease to keep the momentum going. In the 14.3 over of the innings.

Dominic Drakes gave his team a much-needed breakthrough as he dismissed Suryakumar, who scored a superb 76 runs in 44 deliveries.

Hardik Pandya then came to the crease but his stint was cut short as Jason Holder sent him back into the pavilion after scoring four runs.

Deepak Hooda then joined Pant at the crease. The duo took their team to a seven-wicket victory against the hosts with six balls remaining.